Today I’d like to welcome back Eric Strovink of BIQ who, as I indicated in part I of this series, is authoring the first part of this series on next generation spend analysis and why it is more than just basic spend visibility. Much, much more!

“No canned report survives first contact with the analyst.”

Reporting on a large transaction dataset is
technically challenging. For example, pointing ordinary reporting
tools at a large dataset doesn’t work well, because what might
seem like a perfectly ordinary and reasonable database query can require minutes to
complete, sometimes even hours. That’s why OLAP (“On Line
Analytical Processing”) technology is required in order to
return results quickly on large datasets, and that’s why every data
warehouse uses some variant of it.

OLAP is not a panacea. OLAP database queries only
work within a rigid framework — that is, queries are
fast only within the data dimensions and hierarchies that have
been pre-defined. To ask a question outside of that rigid
framework, and to get an answer to that question in a reasonable
amount of time, the underlying dataset structure must be changed —
either dimensional hierarchies must be altered, data re-mapped, or
entirely new data dimensions created.

Data analysis is an inherently ad hoc process —
to paraphrase Sun Tzu, “no canned report survives
first contact with the analyst.” But, in order to be able to perform the
OLAP queries that support ad hoc reporting, it is necessary to change the dataset structure
to support those queries. And, it had better be possible
to do that quickly and easily; otherwise OLAP power cannot
be brought to bear on the ad hoc report, which means that
the report can’t be generated without great pain.

Analysis therefore equates, in a very real sense, to “agility”;
in other words, how quickly and easily one can:

Agility also applies at a higher level. I argued in

Spend Analysis I: The Value Curve that the notion of
one dataset for spending data is limiting, because many
different analysis views — especially commodity-specific
views — can be key to driving additional value. If the spend analysis process involves the creation
of multiple datasets over time, and it’s hard or expensive to build
or modify datasets, then that process can’t move forward.

Agility also requires that the above operations be performed by
business users with limited IT skills, on their own, without
assistance from vendor or internal experts. If the system is
not agile, then the default decision is not to analyze,
as pointed out in

Spend Analysis II: The Psychology of Analysis. That is
the worst possible outcome for the enterprise, because it perpetuates
information starvation in a land of data plenty.

Here’s a heretical statement, coming from a spend analysis vendor:
anything that a spend analysis system does for you can be done
with ordinary tools. You
can use a database system to load a large dataset; you can cleanse your own data by
writing database queries;
you can write programs
to build reports; you can dump data to pivot tables. You can get great answers to your
questions. Some old-school sourcing consultants still use manual methods like
these, and some home-grown spend analysis systems built around
tools like Microsoft Access are still operating today.

However, if you do use a modern spend analysis system, you can produce
those same pivot tables and reports with a few mouse-clicks; and, you can alter their
properties and constraints with slice-and-dice operations easily and quickly. For every
report that the old-school consultant generates, you’ll have had the opportunity to generate hundreds.
Does this mean that your insights will be better than those of the consultant? Not necessarily;
but it’s hard to argue that they shouldn’t be.

If your spend analysis system isn’t agile, though, you’ll be back in the same boat
as the crusty old consultant, and he’ll be laughing at you. You’ll have to extract
transactions from the system and hack at them with the same tools that the consultant
uses, with the same productivity loss.

It’s important to distinguish between ad hoc reporting and reporting in general.
Does the spend analysis system have the ability to produce complex and custom
reports, guided by you?
Or are its reports written in some programming language like Java or C++,
the source code for which is inaccessible to you
and unmodifiable by anyone but the vendor?

Analysis power is precisely the power that you wield as a business user,
independent of canned reports supplied by a vendor. Complex, multi-page
reports such as the original MMG Commodity Spending Report (below),
variants of which are now commonplace across the e-sourcing space, should
be within your reach to create quickly and easily — without any
programming, database queries, or other IT magic, and yet with full flexibility
to build whatever it is that you need. 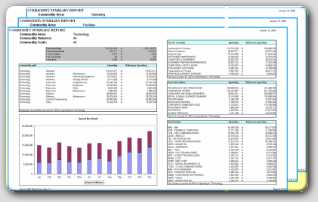