DC Velocity recently ran a good article on how Home Delivery Success Starts at the Order that had some good pointers on delivery success in general. The article, designed to help retailers, gave the following advice:

If you reverse this, you can see how you can optimize your inbound supply chain delivery success when ordering from a supplier.

Pretty simple, eh? Almost as easy as getting the mouse in the bottle …

A recent CNN article which noted that the retirement of the pirate leader Mohamed Abdi Hassan, also known as “Afweyne,” has generated much media coverage, but the real significance of his announcement is the indication it gives of how Somalia’s pirates currently view their business model and that it appears that hijacking vessels in the Indian Ocean and the Gulf of Aden is no longer seen as a relatively risk-free affair concluded that while piracy off the country’s coast will not be ended conclusively … it might be contained to a manageable level.

Depending on what you conclude a manageable level to be, that might happen, but shipping is NOT safe. If a pirate can make 10 times the average annual salary in one hijacking, and one hijacking can command a 5M ransom, even with the introduction of international naval ports, armed guards aboard vessels, and best practices, piracy is not going to stop. First of all, it’s still way too lucrative when the right ship is passing through. While it is true that an average shipment of consumer goods is many times safer, the risk for high-value petroleum, weapons, pharmaceutical, and hi-tech shipments is still there. If there’s a 100M worth of easily-moved cargo on the ship, and pirates know about it, the risk is there — especially with more organized crime getting involved in supply chain thievery. Secondly, when a void is created — there’s always a rush to fill it. Recent warfare against gangs across North and South America has shown us that if multiple gangs are vying for a territory, and the biggest one is wiped out, violence escalates as the smaller gangs jockey for position.

The reality is that, for some of you, shipping is now more dangerous than ever. And any article that tries to insist otherwise is giving you a false sense of security that is even more dangerous. Especially when your cargo is more valuable than drugs and guns.

Logistics Management recently published a piece on Maximizing ROI from Technology that included some good tips that deserve to be repeated.

The first point to note is that, as stated by Beth Peterson (President of BPE Global), the biggest mistake [companies] make is that they implement a solution without even beginning to measure what they were doing before they implemented it. You can’t maximize ROI if you don’t even know what you’re measuring against!

The second point to note is that expectations have to be realistic. You’ll never achieve your goals if they are unrealistic. Also, as the article suggests, when setting goals, try to be as precise as possible. Is it cost savings? Better customer service? Faster delivery? What are the specific metrics that you are trying to improve and by how much?

In addition, as noted, make sure that the objectives do not benefit one functional area to the detriment of others or to the company as a whole. Otherwise, you’re not going to get much support for your endeavor.

And get the implementation right. As per the article, Key factors that need to be in place include the flowing: effective user training; management support of and commitment to the initiative; sufficient allocation of resources; and, perhaps most importantly, buy-in from the users. All of these pieces (which have been discussed in the SI Archives) are essential. Forget one, and it crumbles since you’re building a cube, not a pyramid.

Everybody likes to blame the pollution in our cities on our cars. They do emit pollution, especially poorly maintained cars, and there are quite a lot of them, and they make an easy scapegoat. But they are far from the worst offenders. Every since the introduction of the catalytic converter, we have the reality that the riding mower you use you cut your lawn is probably more polluting than the car you drive to work every day.

People who put a little more thought into it blame the trucking industry. Those 18 wheelers are big, burn a lot of gas, and, in olden days, used to emit more fumes than a small mill. But that was yesteryear. Today, these trucks are as clean as the common automobile and, in some cases, cleaner as many shipping giants are experimenting with, and moving to, hybrids.

And airplanes aren’t the problem either. Modern jets take a lot of expensive fuel to run, which airlines don’t want to pay for. Plus, unless the burn is clean, you can’t get the same power.

The real problem are container ships. As per my post back in 2009 where I asked, What’s Worse? The Personal Automobile or 15 container ships, a single giant container ship can emit the same amount of cancer and asthma-causing chemicals as 50 Million cars in the course of a year. Think about that. There are roughly 250 Million passenger vehicles in the US, which says that it only takes 6 container ships to produce more pollution than all of the vehicles on the road! And there are over 10,000 container ships in the world!

So what brings on this rant again? A recent article over on CNN.com on how shipping looks to clean up its act. According to the article, some ships are now burning low-sulfur fuel while in port, which can reduce toxic sulfur dioxide emissions by 85%. And this is supposed to be a good thing. First of all, at an 85% reduction, that means the ship could still be as damaging 7.5 Million automobiles. Ouch! Secondly, ships spend most of the time at sea. If they are still burning high-sulfur fuel at sea, then, at least three quarters of the time, they are as polluting as ever, which means the 85% pollution reduction in port, reduces their pollution output by at most 20%.

At least (part of) the IMO (International Maritime Organization) greenhouse gas reduction program comes into effect this year and, for the first time ever, includes CO2 emissions. Maybe now that the industry is forced to do something, we’ll see some progress. Because, as noted by Chew Hwee Hong, a good 95% of (shipping industry green initiatives) is incentivized or is driven by international regulations. Shippers ain’t doing it for themselves!

Think about that next time you needlessly outsource something to China. No matter how many CSR (Corporate Social Responsibility) programs you put in place, the minute that product hits the ship, you’re doing more environmental damage than you’re likely to negate with any lean or sustainable development / production program. 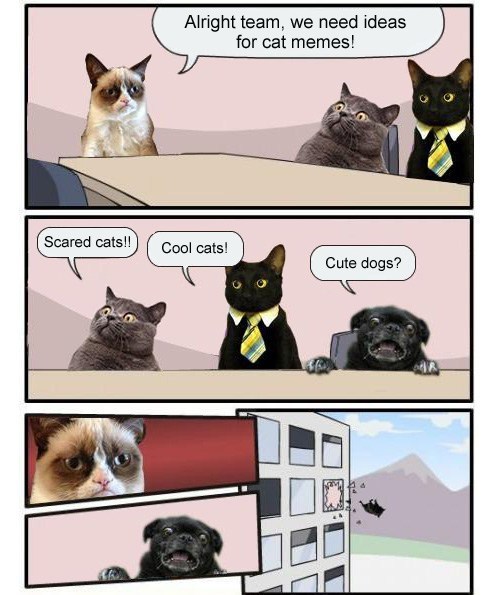 It’s LOLCats, not LOLDogs. Only LOLCats help your mood and your supply chain 😉