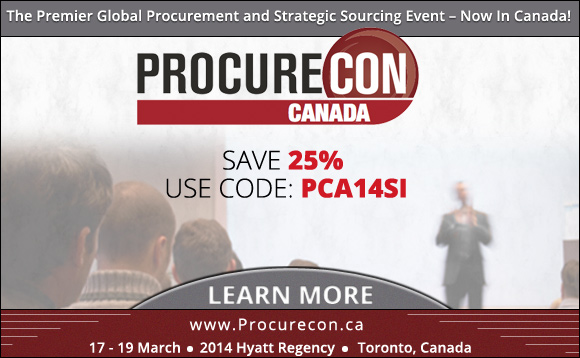 ProcureCon Canada will take place from March 17 through March 19, 2014 at the Hyatt Regency in Toronto. Attend and join over 100 leading practitioners in Sourcing and Procurement to share insights, best practices, and case studies to drive your Supply Management in 2014. Sourcing Innovation readers save 25% when registering with code PCA14SI. Click here to learn more.

Through months of research, ProcureCon Canada has identified a Supply Manager’s top priorities for 2014 and has speakers and sessions to address the identified topics, including:

So join ProcureCon Canada and the doctor who will be moderating the panel on Optimizing Spend Analysis and Visibility to Maintain Cost Reductions at 11:55 am on Tuesday, March 18, 2014.

If you’re looking to start a spend analysis effort or improve the returns from your current effort, this is a chance to get some of your questions answered. In addition the e-Book Spend Visibility: An Implementation Guide, co-authored by the doctor and Bernard Gunther (of Lexington Analytics, which was acquired by Opera Solutions), is still free and available at this link. This e-book, which has been downloaded over 10,000 times, provides detailed guidance on how to start your spend analysis and visibility journey.

Looking forward to seeing you at ProcureCon! And remember to register with the “PCA14SI” code.

In yesterday’s post we noted that back in the noughts, many Sourcing and Procurement technologies were naughts when it came to delivering on their promises, and left a bad taste in the mouth of many earlier adopters, including those that can benefit a company the most. To this end, we highlighted the four examples, in no particular order, of e-Auctions, e-Invoicing, Spend Analysis, and Punch-Outs. Then we asked what are the leading Supply Management companies promoting today?

Sophisticated e-Auction platforms that allow multiple auction formats, weighted-bids, preliminary RFXs, custom lots, sophisticated award rules (all, at least two suppliers, pre-defined split, etc.), weighted bids, and even built-in real-time decision optimization. The platforms today are infinitely better than the platforms ten years ago, but the song still sounds the same to the CXOs who signed off on the first generation e-Auction platforms only to get burned in the noughts.

e-Invoicing
Unlike the early point-technology providers, the leading platforms are not selling a single technology point solution and promising you that one-size will fit all, they are selling an integrated platform that can accept invoices from just about any channel you get them from, in almost any format — EDI, cXML, Supplier Network, PO-flip, e-mail/fax to OCR, print-to-Cloud and/or custom dual-entry. Whereas a good e-Invoice solution in the past was successful if you managed to get 90% of the 20% of suppliers who constitute 80% of your spend on-board after a three year slog, today’s solutions can easily accommodate 98%+ of your suppliers out-of-the-box and can be rolled out globally in as little as 12 months! However, the Finance executives who tried the early entrants in the e-Invoice market ten years ago and got burned are once bitten, twice shy.

In 2005, BusIQ released BIQ, a spend analysis tool that can be used by anyone to build a spend cube on any spend dataset export(s) anyway they wanted and do so in a matter of hours (for a five figure price tag)! Introducing the concept of layered-rules and mapping by exception, it completely transformed the approach to spend analysis which was, until then, based on sophisticated OLAP cube construction (which could take days, or weeks, depending on the number of rules and the size of the spend data set) and often required teams of Indians in the back-room of your provider’s off-shore support centre frantically mapping the unclassifiable exceptions in the hope enough of your data could be mapped in time to pass the sniff test. But with BIQ, a spend master could build a cube in a few hours, create dozens of ad-hoc reports, and follow her hunches until a unique, and valuable, savings opportunity was identified. Since it only took a few hours (or days) of her time, the cost to explore a hunch dropped from tens of thousands to rebuild a cube to a few hundred dollars, and savings opportunities could be identified quickly and easily. It raised the bar, and pushed a number of providers to substantially improve their offerings while simultaneously decreasing the price. Spend Analysis is something every Supply Management department should do and a tool every Sourcing and Procurement professional should have at their disposal, but since the early adopters typically had to fork over six figures for an ROI that proved to be much less than they expected, these initial early adopters are now hesitant to take a chance on a new solution as they believe that spend analysis is still a “fool me once, shame on you but fool me twice, shame on me” buzzword.

Today’s vendors are selling complete, cloud-based, integrated consumer-like shopping portals that integrate punch-out 2.0 instances with buyer-and-supplier catalog management and third-party portals, offering consistent federated search across the punch-outs, catalogs, and portals along with buying-organization price verification, maverick spend detection, and integrated split purchase-order generation. This means that the technology integrates seamlessly, the integration is managed by your SaaS provider, if the price presented by the supplier is not the contract price the buyer is alerted in real time, purchases for off-contract products or products at off-contract prices can be prevented, or at least held until the price is corrected, and each supplier can get their own, customized, purchase order that they can flip back into an invoice (at the push of a button) once the product(s) are shipped. But organizations that got an IT migraine that was beyond their wildest expectations when they tried punch-out 1.0 early in the noughts still fear that there aren’t strong enough painkillers on the market to deal with the cluster head-aches they expect will accompany any new punch-out implementations.

So now you know why SI feels that, for the most part, 2014 will be 2013 part II and 2009 part VI. Until the early adopters get the message loud and clear that today’s technology is truly a decade ahead of its predecessor technology and leaves the problems of its predecessors in the past and until the economy forgets the financial crisis and returns to a growth- and innovation-focussed economy, and not a cost-cutting and market-retention economy, progress will continue to be a slow, up-hill battle and will be limited by the choices of the market leaders.