Laurence Edwards and Robert Z Lawrence of the Peterson Institute for International Economics, and authors of Rising Tide, Is Growth in Emerging Economies Good for the United States, have put a presentation based on their book online that, among other things, clearly demonstrates that China is Not the cause of our manufacturing woes. Given that 86% of North America based companies have a supply chain that relies upon key parts from China (as noted in the Risk Management Monitor) and that a number of prominent economists (including Samuelson, Summers, and Krugman) have stated that growing trade (especially with low-cost countries, with China being #1 for many years) reduces wages, welfare, and jobs, this might be hard to believe. But it’s true. In fact, China outsourcing has had essentially zero impact on North American manufacturing. How can this be?

Consider this chart which shows the manufacturing share in establishment employment from 1961 – 2010. When you look at the forecast based upon the fitted trend line of market share from 1961 to 1979, and the actual share of manufacturing employment, you see that the forecast was dead on! (Moreover, the trend has been repeated around the world – including Sweden, the Netherlands, and Germany.) 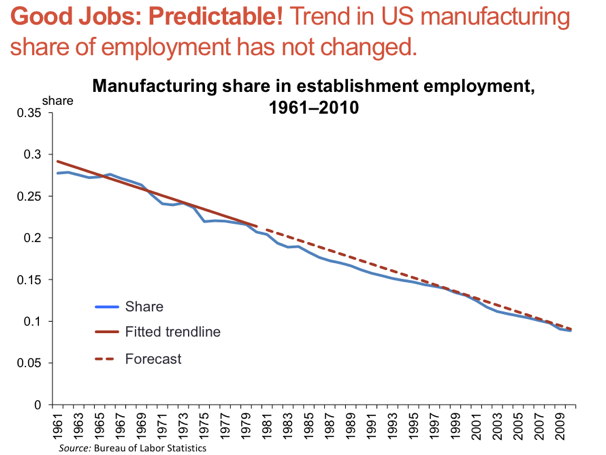 This data suggests that the reason for the decline in manufacturing is a common, pervasive, cause. Specifically, productivity growth. Automation is reducing the amount of labor required to produce goods. If the amount of labour required to produce goods decreases, the only way that jobs could retain constant is if demand increased. But this didn’t happen because, let’s face it, most people only want one fridge, one car, and one iPhone. (Yes, some people want two, or three, but not ten, or more, and when you consider the increase in manufacturing productivity over the last fifty years, for many goods, we’d have to buy ten to maintain the same level of manufacturing employment.)

But we could afford to buy more, as the productivity increases have, relatively speaking, brought many prices down (adjusted for inflation). So why haven’t losses slowed? Because we buy services instead. We eat out more, take limos, and pay carriers to give us 4G service. And that’s the real reason manufacturing jobs have declined, because service jobs grew. So, in this case, we can’t blame China, even though they have taken a very large amount of North American dollars over the past 30 years.