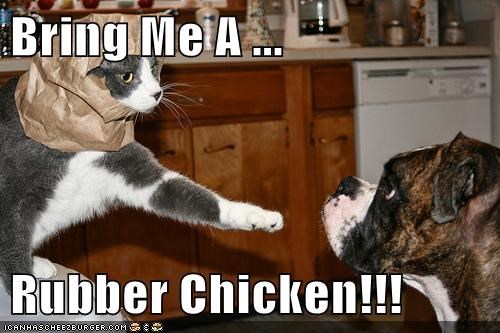 Do you know why LOLCat, who usually wants a shrubbery, wants a rubber chicken today?

45 years ago today was the first airing of episode 3 of Monty Python’s Flying Circus which, if the doctor is correct, is the first episode to feature a fully suited knight who, in his first scene, walks up to counsel in the courtroom and hits him with the traditional raw chicken. LOLCat is asking for a rubber chicken because, if he asks for a raw chicken, he knows the stupid dog will eat it. (And, of course, once the dumb dog brings LOLCat the rubber chicken, you know what’s going to happen next.)