Today I’d like to welcome back Eric Strovink of BIQ to Sourcing Innovation. In this post, Eric tackles the contract management – spend analysis integration issue that the sales and marketing representatives of a number of suite vendors often make a lot of fuss about.

If your company is like most, your contracts are a hodge-podge of dense language resulting from hundreds of negotiations, whether you have a Contract Management (CM) system or not. If you already have a CM system, chances are good that most of your contracts aren’t written with the templates and standard language that some of them offer. In fact, most companies use CM systems simply to organize existing unstructured contracts for better searching, reporting, accessibility, and tracking – with the promise, in some CM systems, of proactive alerts.

So when an e-sourcing vendor claims to “integrate” Contract Management with Spend Analysis, exactly what does this mean? Well, as it turns out, it isn’t even necessary to have a CM system in order to integrate your contracts into your Spend Analysis (SA) system.

Let’s imagine that there’s a stack of contracts on the corner of your desk. The “stack” can be a “virtual” stack that’s held in a CM system, or it can be a physical stack of documents; it’s not important which. Each contract represents an ability to buy a commodity or a group of commodities from a specific vendor, over a specific period of time, perhaps additionally limited to a geographical region or a business unit.

Let’s walk through the process of integrating a contract into the SA system.

1) In the SA system, we create a data dimension called “Contract.” It is a simple list of contract names or other identifying information. An entry is defined for each of the contracts in our stack.

2) Using the SA system’s mapping rules, we map potential spending to each contract in turn. The spending on a contract is typically a function of Supplier, Date Range, and Commodity. For example, if contract C174-KELLY was for temp labor, and it was valid between February 2001 and October 2001, and it was with Kelly Services, then we map the combination of 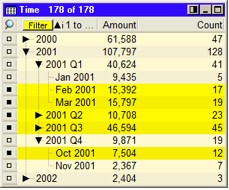 After applying this rule, if we then filter (“drill”) the SA system on the HR>Recruiting>Temps commodity, we see these amounts in the Contract dimension:

Does this mean that all of the 95,996 Kelly spending was on contract? Absolutely not, since we cannot know (1) if Kelly charged us the correct contract price, or (2) whether someone used Kelly without realizing that we had a contract, or (3) whether in fact anyone ever used the Kelly contract at all when doing business with Kelly. Which is why talking about “compliance” at this level of analysis is silly. But we do know, if we’ve entered all our contracts this way, that the “Other” spending was definitely not on contract. That’s valuable information, and it’s better than half-measures to find bypass spend, such as a “preferred vendor” dimension.

Now, what was the difficult part of the above? Well, it was figuring out what “Commodity” the contract was for, from the perspective of the SA system. Building the Contract dimension is easy (perhaps a vendor’s “integration” logic performed this few minutes of work for you) – but building the rule that maps the contract into the spend cube requires reading the contract and deciding what SA commodity should be referenced. The final work to add the appropriate rule to the SA system? 20 seconds, tops.

Bottom line: It’s easy to integrate contracts information into your SA system. And, with some SA systems, you can embed an HTML link to the contract document itself, directly from the Contracts dimension, to establish a useful reverse linkage.

All without a CM system at all!