After our coverage of Environmental Damnation 17, Greenpeace, you probably suspected this damnation was coming. After all, when it comes to activist organizations, two always come to mind, Greenpeace and PETA. And while you might not think that PETA is an environmental & sustainability damnation, because it’s best known for its rather go naked than wear fur campaigns, which is all about not wearing fur as the harvesting of fur is typically the result of animals being killed, and sometimes raised in inhumane circumstances just to be killed, only for fur. As a result, you might think that PETA is only a damnation for fur traders, but that’s far from the truth.

But for those of you who don’t pay too much attention to PETA, or the huge hassles they cause for any organization that the feel is unfairly treating animals, if you take the time to go to PETA‘s site, you’ll see in great big letters at the top of the screen:

Animals are NOT ours to eat, wear, experiment on, use for entertainment, or abuse in any other way.

This means that if your operation or supply chain is any way, shape, or form dependent upon animals, either for food, clothing materials, entertainment, or, and may your favourite deity grant favour on you here if this is the case, sale, you could end up in PETA’s crosshairs and feel the pain.

It’s not just big chains like Kentucky Fried Chicken (which has to deal with the perpetual onslaught from PETA which maintains the Kentucky Fried Cruelty site) and which has enlisted the help of A-list entertainers to join in its crusade) that feel the wrath of PETA. Smaller operations can also feel the pain. For example, just last month PETA decided to go after the wool processing industry, allegedly recently released a video that reveals workers on an Australian sheep farm mistreating sheep. (Source: MagicOnline), and called for a boycott on the industry as a whole (claiming that over the past 16 months it released five exposes that resulted from a review of 37 facilities on three continents where sheep are “mutilated, abused and skinned alive — even for ‘responsibly sourced’ wool on so-called ‘sustainable’ farms”).

Nor is it just obvious targets that buy animal products for food or clothing. For example, right now PETA is also calling for a boycott of Air France because it is the only major airline that continues to ship monkeys to laboratories for experimentation where they were “routinely mutilated, poisoned, deprived of food and water, forcibly immobilized in restraint devices, infected with painful and deadly diseases, and psychologically tormented” after they were forced to “suffer from the long and gruelling transport in the cargo holds of planes and in the backs of trucks”. And since it was reported that 90 percent of drugs tested on animals failed in human trials, PETA claims that primate transportation for experimentation is unnecessarily cruel.

PETA is a damnation to your supply chain because even if you are only ordering the end product, or transporting goods for someone else, you can still find yourself in PETA’s crosshairs and your brand will take damage when they go after you. (So unless your company is one that only sources and sells synthetics for vegans that insures it’s supply chain is 100% animal free, good luck!)

Normally, LOLCat can’t be bothered to comment on our damnations, because it just doesn’t care, but after finding out that Air France transports primates for experimentation, LOLCat has something to say: 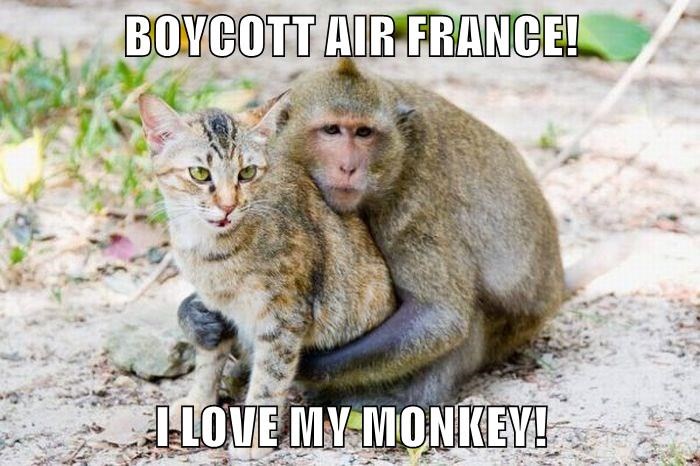