Wired recently had a short, graphical, article, on the new trash processing facility in Sydney, Australia that was built by Global Renewables in its effort to shrink the millions of tons of recyclables that end up in landfills every year. A high-tech marvel of a processing plant that uses technology that includes wind sifters, optical scanners, magnets, and electrical currents, it is capable of diverting 75% of a city’s waste stream to recycling. This significantly cuts down on landfill space requirements, methane production (from rotting garbage), and greenhouse gas emissions.

The 6-step plus process, depicted in the graphic linked through the thumbnail below, is quite ingenious. 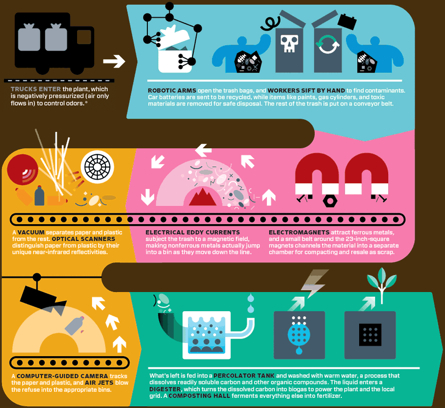