Last week, Canadian LOLCat said Canada, do NOT vote Conservative because, in LOLCat’s view, it was long past time for Harper to go.

However, since the election is tomorrow, SI wanted to be sure LOLCat hadn’t changed its mind. So we asked:

LOLCat, have you changed your mind about your opinion that Canadians should NOT vote conservative tomorrow?

No way! It’s time to Vote that [Person] Out!

Why so hard on Harper, LOLCat. Not that we don’t agree that he deserves it, but I’m curious. Is it his invasion of our privacy? Is it his withdrawal from environmental protection? Is it his adoption of war-like ways and his love for Uncle Sam? Is it his treatment of sick moms on disability? Can you even settle on a #1 reason why Harperman, it’s time for you to go?

It’s his refusal to end the seal hunt!

Really? I know it’s cruel, but why does that particular injustice bother you more than his many efforts to enact legislation that violates our very basic rights and freedom?

If he allows those poor, defenceless, furry seal cubs to be bludgeoned to death, how do we know we’re not next? Our fur is just as soft …

Good point, LOLCat. Good point. You must be terrified. (FYI, if you, like LOLCat, love the seals too, you should sign the Humane Society International petition to end the seal hunt.)

So, in the words of our new Veterans Group slogan, tomorrow, remember its Vote Anyone But Conservative! And maybe Canada will have a future that doesn’t involve it becoming the 51st state … 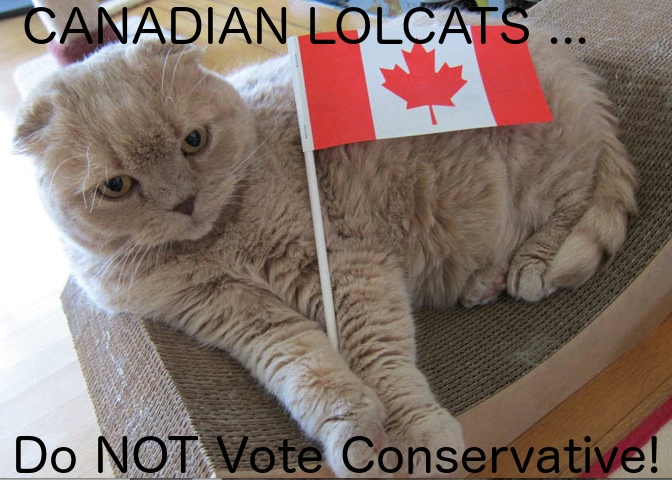